In light of COVID19 and us entering into the flu season the dangers of contracting pneumonia and respiratory diseases are on everyone’s minds. Will our hospitals be able to cope with the number of sick people? Is there enough equipment and hospital beds? Prevention of respiratory diseases is more important than ever. The entire world is putting measures in place to help prevent the spread of COVID19, but also the progression of viruses into the lungs, leading to respiratory diseases and terrifying symptoms such as “not being able to breathe”.

Research is showing that visiting the dentist during this time may be one of the major ways people can prevent respiratory diseases. A few weeks ago the government announced restrictions on dentistry to be reduced during COVID19, stressing the importance of dental prevention and routine dentistry right now. But Why?

Dental Clinics may be playing a vital role in preventing respiratory diseases by removing toxic bacteria colonies that live inside our mouths! These bad bacteria are often symptomless and sometimes not even visible to the eye. They grow every day and attach themselves to natural teeth, as well as fake teeth such as dentures, implants, crowns, bridges and veneers. You can brush and floss most of these bacteria off in the first 24hrs, but these bacteria are clever and are fighting for their survival inside your mouth! So they often hide in tricky places that are hard to reach, such as between your teeth, under crowns/bridges and around/inside your gums. Within 24hrs they begin to harden and firmly attach to your teeth like concrete, referred to as ‘Calculus’. Once this happens you can no longer remove them yourself safely at home without damaging your teeth, we have seen people attempt this and end up paying the price to fix the damage they caused at home. This is why your friendly dental hygienist or dentist needs to safely and effectively remove the bacteria for you at least twice a year, as advised by the Australian Dental Association, private health insurances and world-wide research studies.

This all may not be news to you, but the part that stands out is that this routine bad bacteria removal often referred to as a “Scale and Clean” may not only be good for your dental health, but is in fact proven to aid in prevention of Respiratory Infections such as Bacterial Pneumonia and Chronic Obstructive Pulmonary Disease (COPD). Bacterial Pneumonia is an inflammation of the lungs caused by viral, bacterial or fungal infection. Symptoms include cough with mucus-like sputum, chills, fever, chest pain and shortness of breath. The development of bacterial pneumonia depends on the colonisation of pathogens in the oropharyngeal region (throat), aspiration of these pathogens lower down the airway and failure of the body’s defense systems to eliminate bacteria from the lower airway. Unfortunately other health conditions that reduce effective aspiration include history of stroke, Parkinson’s disease, sedative use and alcohol abuse. The defense mechanism of the respiratory tract to eliminate bacteria has also been shown to be impaired by many other conditions/circumstances e.g. diabetes, smoking, malnutrition and corticosteroid use (immunosuppressants). Sadly even before COVID19, pneumonia was recorded as the second most common infection in institutional settings and had a 20-50% mortality rate (Mojon, 2002).

Let’s now explore the bad bacteria that grow in our mouths and how it can be responsible for Bacterial Pneumonia and Respiratory Diseases. A study of ancient oral microbiology has revealed that despite many changes in our diets and lifestyles over the last 1000 years, the mouth has been a long-term host for bacteria that initiates respiratory diseases, as well as development of heart disease and other systemic diseases (Pacey, 2014). According to Warriner et al, dental calculus, the hardened bacteria in the mouth, ‘is a robust, long-term biomolecular reservoir of ancient disease’. The diagram below shows how the bad bacteria attached to our teeth/gums can foster oropharyngeal (airway) colonization by bacteria that can be respiratory pathogens.

Pathogenic bacteria that cause respiratory disease colonize the layer of bacteria on the teeth. They then shed in high numbers into the oral secretions and are mixed with cytokines and other biologically active molecules from gum inflammation that is caused by the bacteria. These secretions may then be aspirated into the lower airway to contribute to infection and inflammation in the lungs (Scannapieca, 1999). 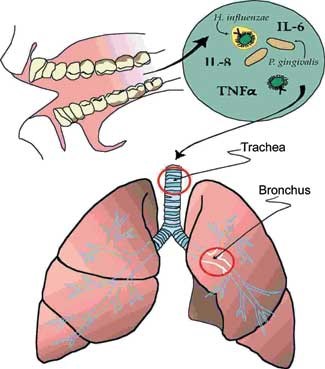 A Sysmetic Review of all the published research on the association between Respiratory Disease and Dental Health concluded that ‘there is good evidence that improved oral hygiene and frequent professional oral health care reduces the progression or occurrence of respiratory diseases’ (Azarpazhooh & Leake, 2006).

The bad bacteria on your teeth that is associated with Pneumonia and Respiratory Disease can be removed gently in as little as 30-60min safely by a registered dental practitioner. Simply call and ask for a “Scale and Clean” to reduce your risks of Pneumonia and Respiratory Diseases, especially during this pandemic and flu season. At the Balnarring Dental Centre our dental hygienists and dentists are gentle, ethical, well-informed and follow the ADA guidelines. We are teaching other dental clinics on how to perform dental treatment during COVID19 on free webinars and YouTube videos worldwide. We have implemented safety measures according to the COVID19 guidelines and have invested thousands of dollars into special equipment such as a top-of range FLIR thermostat (temperature scanner) to keep our community and team safe. Even our medical GP colleague came in to see us the other day and said “isn’t that a bit over the top?”, to which Dr Tiv says “be that as it may, nothing is more important to me than the safety of the Balnarring Dental Family- our patients and team”.